Located just outside of Louisville, Hive & Barrel is one of the only meaderies in the state of Kentucky. The operation shares space with Third Turn Brewing, and Backside Grill. The sizable, shared tasting room/tap room had only a couple of their available meads on draft, with a number of others for purchase in bottles.

Google maps seemed to want to point me to the neighboring fire stations, but once discovering that, it was fairly easy to get to from Louisville proper. Due to the shared space with other, the venue was actually quite busy when I visited on a weekend. There was a lot of large, family style tables available. On top of the offerings in the tap room, there is also an available tour that the meadmaker guides, giving you a glimpse of the creation process, as well as the production area. There is a sign up sheet available in the tap room, and the tours cost $5, but come with several small tastings of flavors that may not be available on tap or by bottle out front.

So if you’re new to trying mead in general, this could be a good introductory place, as there are plenty of other options besides mead in the tap room and grill, in case you decide mead isn’t your thing.

When I visited, they had two flavors on tap, a Hibiscus mead, and a PB&J mead. Both clocked in at 12%. I tried the PB&J while I was there. Both the peanut butter and the jelly came across in the nose. The jelly flavor, however is much more prominent than the peanut butter. It is jelly-forward, with the peanut butter coming in as more of an after taste.

Among the tour samples, they had around twenty different flavors to pick your allotment of tastes. There were quite a few fruit flavored choices, which are always popular. There was your obligatory traditional mead, as well as several flavors that had been aged in different whiskey, and sherry barrels.

The flavors they had available were all very good. The price for a glass was $7, which was a bit higher than most meaderies charge for the size of the pour they gave you. It was slightly bigger than the size of a flight glass. But the ABV is also higher than many of the sessionable meads most commercial places seem to be putting out. 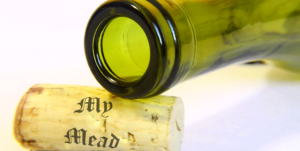 Fermentation of your mead finished a while ago, it has fully cleared and sat aging in your carboy. Now what? Carrying around a gallon glass jug is not a great way to share your creation, so it’s time to bottle. First step, deciding on the type of bottle you wish to use. There’s a few […]