It is widely thought that mead is the oldest of the fermented beverages that mankind cultivated. While we have no records of it, as its use predates written history, the discovery of mead could have happened quite by accident. Due to the relative simplicity of mead, being just honey, water and yeast, a fallen log containing a beehive that had collected some rainwater could easily have started a fermentation. Any wandering hunter-gatherers drinking from this source would have experience the first intoxication in human history. Early cave paintings show the collection of honey from hives. Archaeologists have found traces of honey and indications of fermentation in Chinese pottery dating back to 7000 BCE. However, we don’t have a written recipe appear until roughly 60 CE.

As the mechanics of fermentation were not well understood until as late as the mid 1800s, the attempts to replicate these processes relied upon a lot of luck and guess work. This lead the art of mead making to take on a very mystical and eventually religious narrative.

The Magic of Mead

Both the Greeks, and the Norse held mead (or as the Greeks’ called it Ambrosia) of great import in their culture. Each attributed the creation of the drink to a divine act, and was not originally meant for mankind to possess. Check out the Mead of Poetry for the Norse’s myths. One depiction of the myth of Tantalus involves him stealing ambrosia from the gods in order to bring it back for mortal consumption. His punishment for doing so was an eternity of standing in a pool of water that would lower out of his reach when he went to quench his thirst, with a nearby fruit tree branch that would move just outside his grasp.

The Greeks attributed this drink to immorality, with such a high regard for the drink. It makes an appearance in many of their legends. It was even the liquid that Achilles was dipped into to grant him his invulnerability, except for his ankles where he was being held during this process.

Arguably a form of modern day mythology, the Lord of The Rings books also make reference to this drink. The meadhall of Rohan acts as a brief location for the adventuring party.

Another tradition to have sprung up around mead is the source of term “honeymoon”. The Norse wedding celebrations would last for an entire month (one cycle of the moon). The father of the bride would supply a month’s worth of the drink as a part of her dowry. It was said that if you drank mead for that entire month after the wedding, the first born would be a son. When this came true, much praise was showered upon both the groom, as well as the meadmaker. There developed a certain reverence around special heirloom drinking cups that were supposed to have luck in birthing sons. These would be passed from father to son for generations.

The idea that the drinking of mead could somehow influence the sex of the child is not as crazy as it may seem at first. The mead’s acidity and sweetness could potentially influence the soon to be mother’s body acidity. It is currently thought that acidity or alkalinity of the female body during conception can influence the sex of the newborn. However, it appears that higher acidity may actually favor the X chromosome (girls), while alkalinity favors the Y (boys). If there is any affect at all, it appears mead (and really any alcoholic drink) would promote more girls to be born.

The Downfall of Mead

As agricultural methods improved, crops such as barley and other grains, as well as vineyards for grapes outpaced the scale-ability of honey extraction. Beers and wines gained in popularity with their newfound abundance, especially in southern Europe, and eventually pushed mead into near obscurity. Outside of the more northern climes, where fruit production was limited, mead was often reserved for the royalty and nobility, with the increased expense of this now specialty drink. Queen Elizabeth was known to favor the drink, and her favorite recipe still survives. It is a metheglin braggot (herb flavored mead mixed with a beer, or fermented with the addition of grains) made with rosemary, thyme, bay leaves and sweet briar.

During the middle ages, the demand for beeswax rose with the increasing influence of the Church, and their desire for wax candles. It became more economically advantageous to go after the wax than the honey in the beehives, shifting the production of mead out of the limelight.

Outside of the Scandinavian regions, Ethiopian T’ej is one of the only other mead-esque drinks to survive with widespread use into the modern age. It is also a honey based drink, but includes the bark or twigs of gesho to provide a similar bitterness as hops do in beer. This makes the T’ej drinks resemble a braggot style mead. 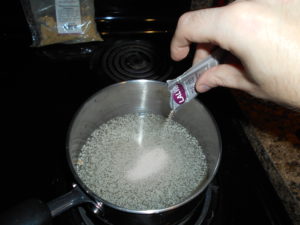