Of the meaderies I have visited so far, this is one of my favorites. Bee Well is Located in Bellaire, Michigan. While their mead selection was somewhat limited, they had a ton of nice ciders to pad out their available products. Everything they had available was very good.

They also had available an apple soda available for sale that my wife raved about. Although that wasn’t one of their own creations.

This had a light ginger nose. It was sweet, with a strong ginger kick to it. It finishes with a hint of peach. This was lightly carbonated.

No noticeable nose. This had a crisp, apple flavor. The cinnamon and vanilla were very faint. It had light carbonation, but a bit more so than the ginger peach.

No noticeable nose. This one surprised me. It was a different type of cherry from what I was expecting. It had a very sweet, tarty flavor with a bit of a bite to it. I couldn’t identify whether that bite was from a spice or part of the cherry (it seemed present in some of their other cherry beverages as well), but it rounded out the flavor nicely. This was also lightly carbonated.

No real nose. This had a strong citrusy flavor to it, with a light hoppy bitterness to it. It had a dry finish. I found it very pleasant, and I’m not even a huge fan of hops.

This experimental brew comes in at 17% ABV. You can taste the heat. There was a sweetness to the nose. I could still detect that bite/spice, the same as the Cherry vanilla.

Overall, very enjoyable, however I believe they may have run out for the time being. It remains to be seen if this will be added to their tap permanently.

This was a very mild flavor, but definitively pear. Nice and sweet.

This had a light cherry nose. Tart and sweet, with a fair amount of carbonation. This was not the same super sweet cherries as the two cherry-based meads. Very smooth to drink. Finishes with a crisp apple flavor.

This one is all about the heat. With an impressive list of heat inducing ingredients, with the ghost pepper as the centerpiece, this one is an interesting drink.

The heat was a slow build, and wasn’t quite as bad as I had built it up in my mind. Never reaches the painful heat that some foods can. If you’re feeling adventurous, give it a try. But save it for last, you won’t be able to taste much for a while afterwards. 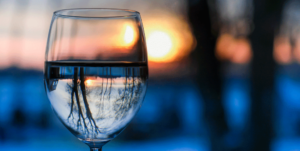